THANK YOU for purchasing the MINI Gen1 Smartphone Mount Pro Series from CravenSpeed. This product is made from the highest grade materials, and is guaranteed to be free from defects.

This kit is designed to allow the driver to position a smartphone for heads-up view without needing to handle the device. Pro Series mounts allow you to customize your view by adjusting the extension arm to the angle that suits you. Simply snap in your mobile device and away you go! You will now be able to swivel the device for Horizontal or Vertical viewing quickly and easily!

The installation time for this product is approximately 30 minutes to 1 hour, depending on experience and your mechanical abilities.


It is important to note that this CravenSpeed Pro Series Mount is compatible only with Gen1 R50, R52 and R53 MINI Cooper vehicles. For other MINIs, please refer to the CS-AB916 or CS-AB919 Installation Guides.


If you have any problems during installation, please contact the company that sold you this product to work through the problem. When contacting support, please have your order number and vehicle chassis number ready. If you’re unsure what your chassis number is, you can refer to our MINI Chassis Model Code Guide. 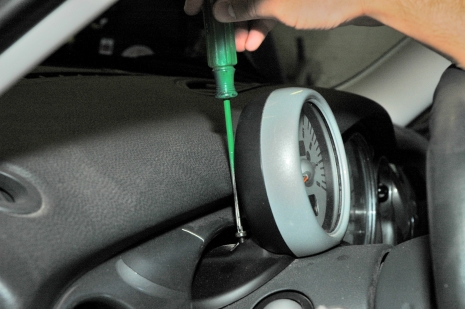 Pull the tachometer towards you to slide it off of the hidden rail.

Lean the tach towards the wheel to gain access to the 2 screws on the backside of it. You may leave the wiring harness plug attached to the tachometer.

Using the Phillips head screwdriver, remove the 2 screws on the back cover of the tach. You may wish to keep these OEM screws, but you will not need them for this install.

Note on Removal of Tach

The tachometer is fastened to rails on the steering column, so take note as you remove it. It will be important to realign this rail for proper re-installation.

Set the 2 included spacers into the holes where the factory screws were. Gravity should keep them there while the tach is leaning forward.

Place the Bracket Z so that it fits over the 2 spacers while you affix the bracket with the included Plastite screws. These screws will be slightly longer and a little thicker in diameter than the OEM screws in order to anchor the mount securely. You will still be able to reinstall the OEM screws if you ever uninstall the mount. Do not over-tighten these screws as you risk stripping out the plastic threads in the tach housing. 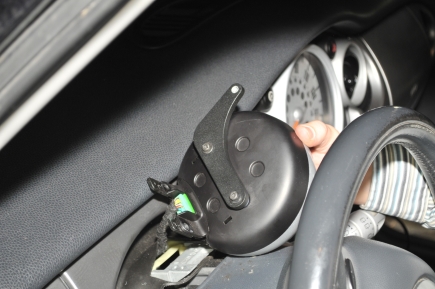 Put the tach back in its original position on the rail and reattach it with the T-25 Torx screws.

Left side or right side?

CravenSpeed Mounts come set for the right side of the tachometer, but we realize that this is not the perfect position for all users. If you wish to switch to the left side, follow these instructions:

First, loosen and remove the locknut, button head screw and plastic washer holding the arm onto the Bracket Z with a 5/32 hex driver and 7/16" wrench. Flip the Bracket around to it's new orientation and re-install the arm with the locknut, washer and button head screw. The Z Bracket can also be installed upside down for a lower mounting position on the right or left side of the tachometer.

This kit is designed to allow you to install an additional 12v socket inside the center console, freeing up the original and allowing you to semi-permanently hard-wire a car charger in your MINI. The product is tested before shipping and is guaranteed to be free from defects.

Safety first; Since we're working around wiring let's start by disconnecting the battery!

Remove the T-25 Torx screws located in the cup holders. 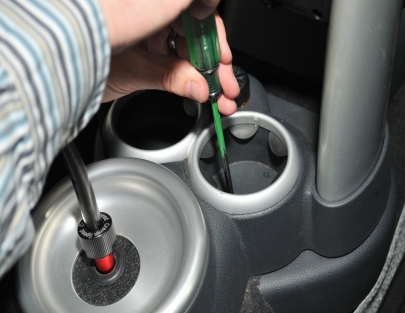 Pry up the cover plate that holds the mirror adjuster and remove the two T-27 screws under the plate. 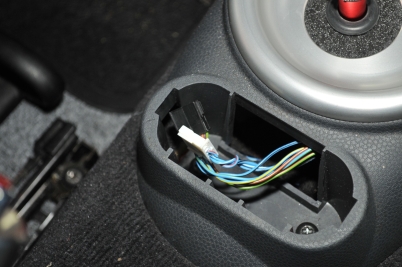 Remove the four T-30 screws that hold the silver-toned pillar covers that surround the stereo and heater controls. Finally, remove the shift knob. The stock knob can be simply pulled straight up and off (do not twist). Carefully lift and maneuver the console up, but don’t pull! There you will find the power wires to the 12v socket. Carefully unplug these wires from the socket and set it aside. They have a one-way plug, so you don’t need to mark their locations. 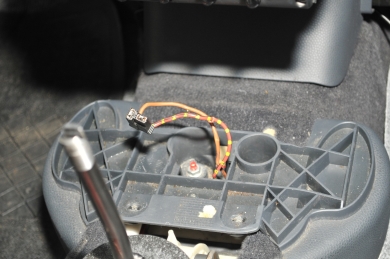 Take the provided 12v socket and examine the wires. These two wires will tap into the wires of your stock 12v receptacle. The wire with red marking is the positive wire and the black wire with faint writing is the ground wire.

Use the supplied tap connectors to splice into the wires. The red/green striped wire in the MINI is the car’s 12v positive wire and the car’s ground wire is the plain brown one.

Connect the red/green striped wire to the 12v extension wire with red marking and then connect the plain black wire to the MINI's brown one using the supplied taps.

Wiring the Charger to the Mount

Re-assemble the center console. Be sure to re-connect your stock 12v power socket! Next, replace the kick panel under the steering wheel. Finally, place your electronic device into the clip and plug it in. Reconnect your car battery and turn the key on. Your device should now receive power normally to the convenient location at the end of the mount. 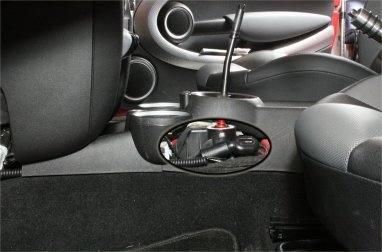