THANK YOU for purchasing the ND MX-5 Miata Short Shift Kit from CravenSpeed. This product is made from the highest grade materials, and is guaranteed to be free from defects. 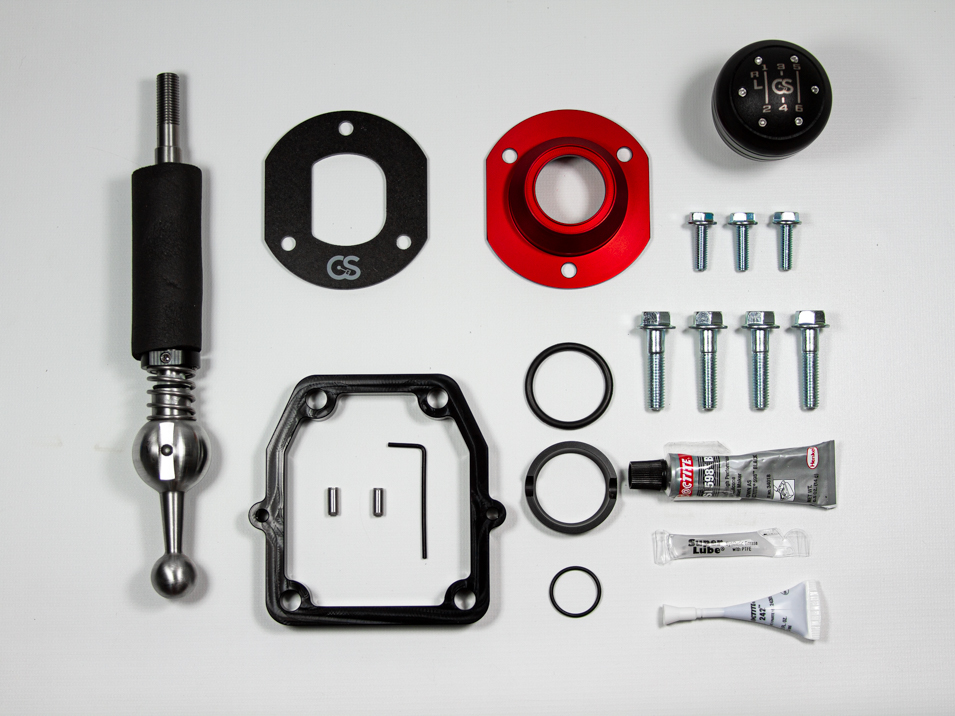 NOTE:  This install may seem a bit intimidating at first glance, but honestly, it is fairly simple and straightforward. Just read through the instructions completely and take your time. If you are unsure of your mechanical abilities, please seek out a friend that can assist you or a professional shop that can complete this install for you. We recommend that you perform this upgrade when the vehicle is cool, as the transmission and related components can be extremely hot to the touch. 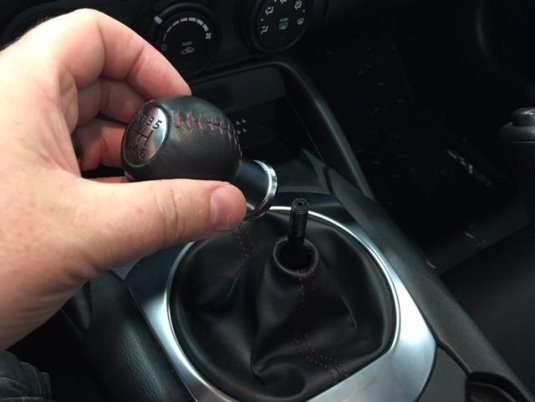 1. Sit down in the driver’s seat and remove the OEM shift knob by unscrewing it counter-clockwise. It may be installed very tightly, but it does unscrew. 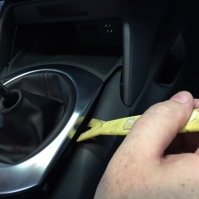 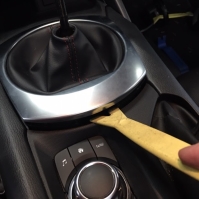 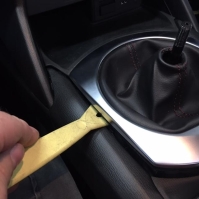 2. Utilizing a trim panel removal tool, pry around the shift boot bezel to release it from the center console. Lift it off of the shift lever and set aside. Slip the foam collar up and off as well. 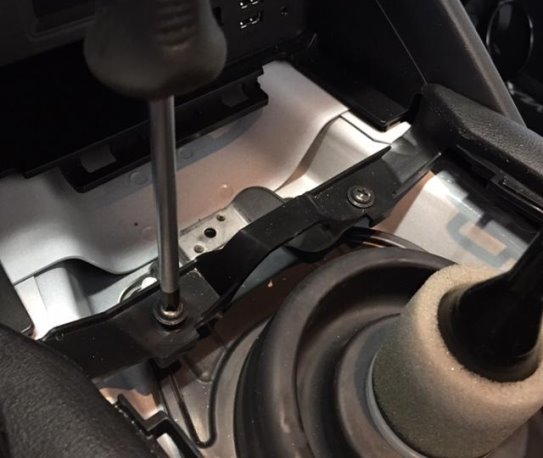 3. Remove the two Phillips screws affixing the thin bridge section of the center console, just forward of the shift lever. 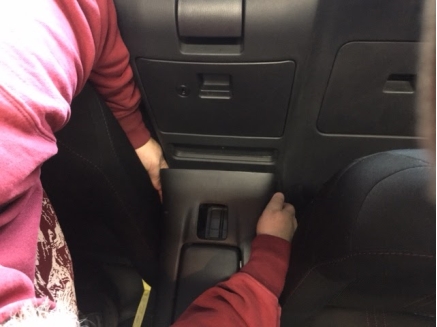 4. Turn around and grasp both sides of the center console towards the back where it meets the back panel of the interior. Tug upwards until the rear side clips release. Do not pull upwards too high; just enough for the rear clips to release. 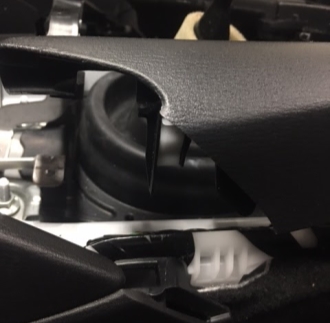 5. Sit back down in the driver’s seat and release the two clips at the front of the center console where it meets the dash (one on either side, pull up). NOTE: Use a bit of caution as these two clips are fairly fragile. #askmehowiknow 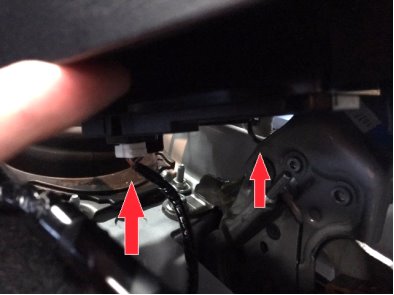 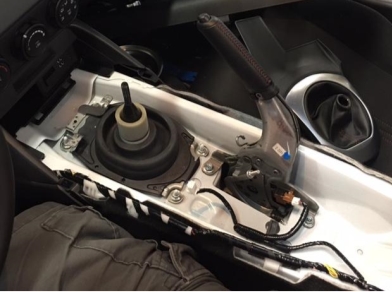 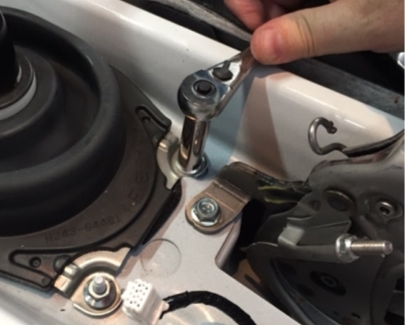 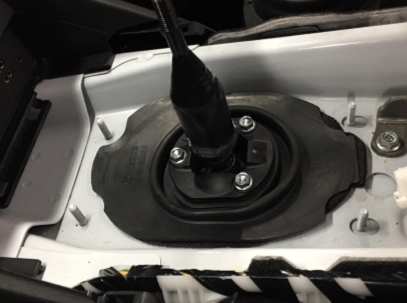 2. Underneath the rubber shift lever boot you will find a flat rubber seal that surrounds the  shifter housing and is adhered to the transmission tunnel of the body. Peel this seal off and set aside. 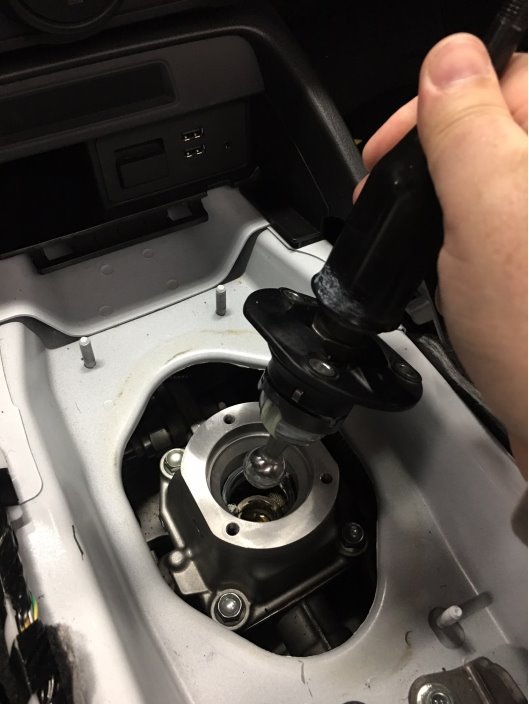 Pro Tip: While the shifter housing base is removed from the transmission, be extra mindful to not drop anything into linkage area. On the bright side, this area appears to be shallow and separate from the inner workings of the transmission, but have a magnet tool handy in case of any mishaps. 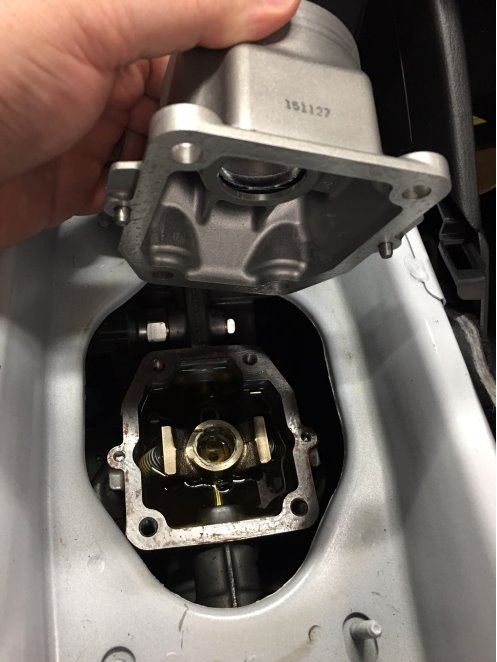 4. Remove the (4) 12mm screws around the perimeter of the shifter housing. You will not be reusing these screws, so label them and place them in your parts bin. The shifter housing is also affixed to the transmission via RTV sealant, so it will not just pop right off. There is a ‘tab’ casted into the front edge of the housing that you’ll need to pry up with a tool of your choosing. We utilized a small pry bar, but you may be able to fit a small screwdriver in there and complete the task. 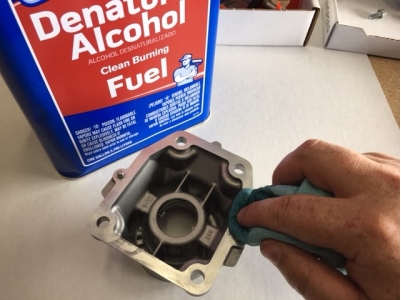 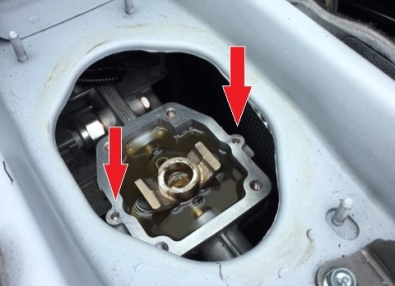 1. Insert the (2) M5 x 12mm dowel pins into the holes on either side of the transmission housing. NOTE: TAKE CARE THAT YOU DO NOT ACCIDENTALLY DROP A DOWEL PIN INTO THE TRANSMISSION. No, we didn’t drop one, but it might be a bit of a pain if you did. Again, have your magnet tool handy just in case.

Take the black anodized shift housing spacer and apply a thin film of the included RTV Transmission Sealant to both mating surfaces (top and bottom). Apply it sparingly as you do not want any excess sealant squishing out and getting into the transmission. 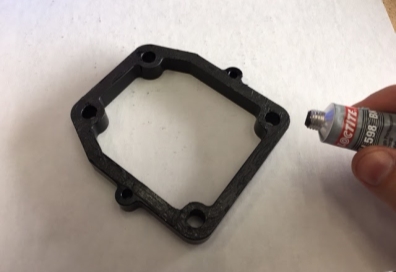 2. Place the shift housing spacer onto the transmission, indexing it with the dowel pins you just installed. 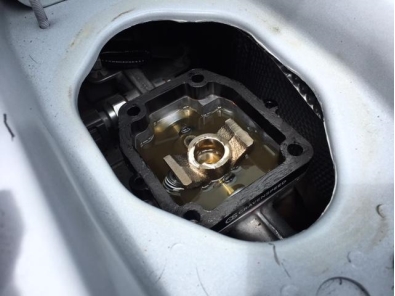 3. Next, set the shifter housing back into place on top of the spacer making sure the dowel pins in the housing spacer index with the small holes on the spacer. Add a small drop of threadlocker to the end of the threads of the the (4) M8 x 35mm flange screws, insert them into the four corners of the shifter housing/spacer and tighten onto the transmission housing with your 12mm socket and wrench. 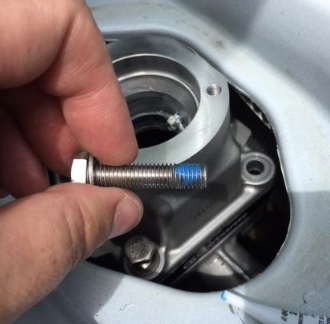 4. Take the Short Shifter Sub-Assembly and apply a film of PTFE Multipurpose Grease to the lower and main pivot sections. NOTE: The grease included with your kit may look slightly different from the packet in the images. 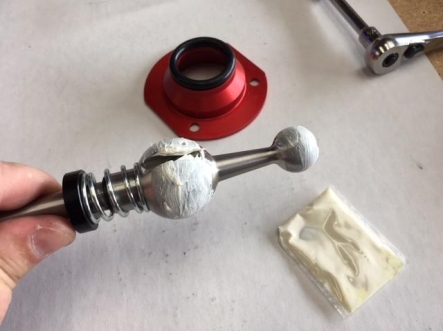 5. Place the Upper Pivot Cup over the shaft section and down onto the main pivot. Position the half-circle sections so they line up with the slots in the main pivot. 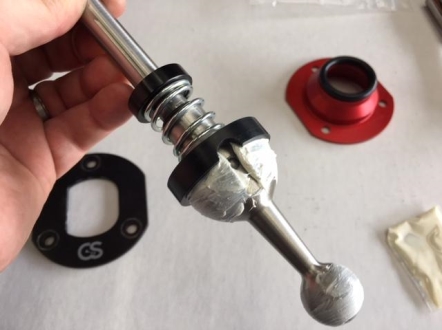 6. Set the Large O-Ring over the shift shaft and down onto the flat side of the Upper Pivot Cup. Next, place the red anodized Shift Retainer on top of the Large O-Ring so that it’s groove engages the o-ring. 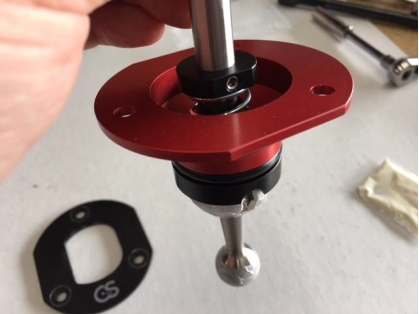 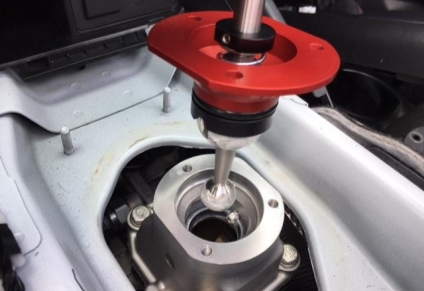 8. Place the Reverse Lockout Plate over the Sub-Assembly so that the three holes line up with the Shift Retainer and the flat side of the center hole is positioned to the drivers side of the vehicle. Add a small drop of threadlocker to the (3) M6 x 20mm flange screws and install them into the shifter housing affixing all components. 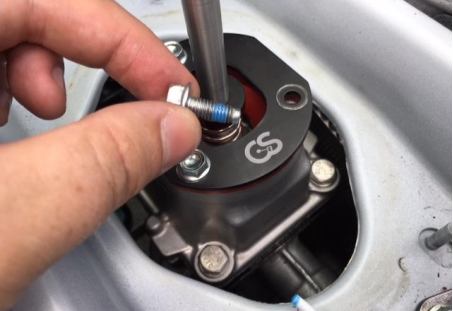 9. Place the flat rubber seal back onto the top of the transmission tunnel. 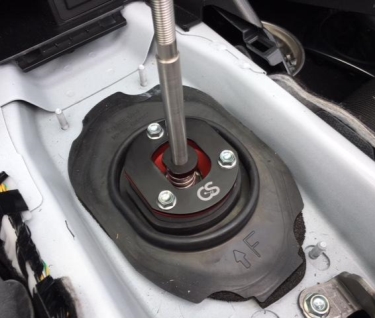 10. Set the shift lever boot/metal frame back onto the transmission tunnel studs and replace the (4) 10mm nuts. 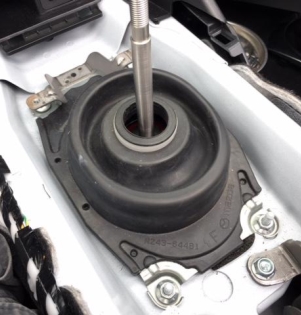 11. Install the Short Length of Foam Tubing over the shift lever, through the rubber boot and coming to rest on top of the spring collar. 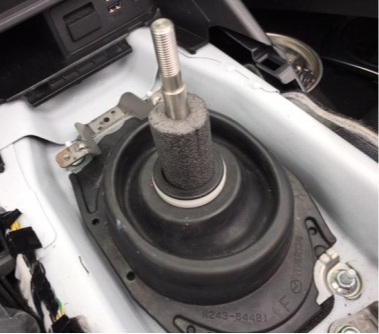 12. Replace the center console making sure you reconnect both the parking brake boot tab and the infotainment wiring plug on the underside. Set it into place and press down around the perimeter until you hear the clips engage. Re-install the (2) Phillips screws across the thin plastic bridge. 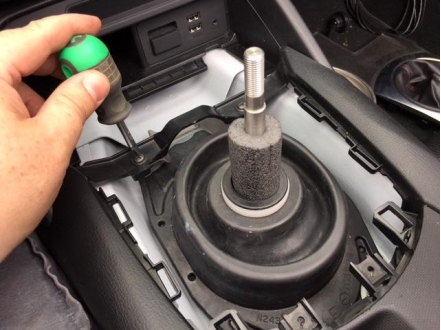 13. If you’re reusing your factory shift knob, you can go ahead and re-install the shift bezel by setting the rubber tray into the dash receptacle then pressing down around the perimeter of the bezel until the clips engage.

14. Finish by reinstalling the shift knob and tighten until the shift pattern is clocked correctly.

If you are installing the CravenSpeed Shift Knob, click here